Protein processing and production is often hampered by the formation of aggregates that restrict and complicate the handling of proteins, antibodies and enzymes. NVoy polymers are designed to minimize the sequential losses in consecutive protein processing steps which would otherwise dramatically reduce the overall protein yield.

NVoy technology is an alternative to the use of detergents, fusion proteins, arginine, chaperones and a range of other common additives employed to increase protein solubility and enable the handling of proteins in solution for better performance in downstream applications (MS, crystallization, HTS assays, etc.).

NVoy technology utilizes NV polymers (NV10), proprietary carbohydrate polymers, which are designed to increase the solubility and stability of proteins while preventing aggregation and reducing non-specific binding. NV polymers are linear, uncharged carbohydrate polymers of around 5kD, derivatized to make them highly amphipathic. They associate at multiple points with surface exposed hydrophobic patches of proteins in a dynamic fashion to form multipoint, reversible complexes. Multiple-binding points allow NV polymers to be used at low concentrations relative to alternative reagents, and their size prevents them from entering the protein core and inhibiting normal structural bonding or blocking catalytic/binding sites. NV polymers are easily separated from the protein when they are no longer required in solution.

NVoy technology can be used to minimize protein losses due to aggregation and non-specific binding during concentration. NV10 will co-concentrate with the protein in solution to give continuing protection.

Protein processing and production is often hampered by the formation of aggregates. NVoy technology is an alternative to the use of detergents, fusion proteins, arginine, chaperones and a range of other common additives employed to increase protein solubility and handling. The NVoy polymer increases the solubility and stability of proteins while preventing aggregation and reducing non-specific binding.

NV10 associates with the protein in solution and protects the cleaved native protein from aggregation and instability without affecting the cleavage reaction.

Figure: Cleavage of the protein kinase fusion CK2alpha/-MBP. Removal of the maltose binding protein fusion partner (k-MBP) from the kinase, using Factor Xa, results in heavy aggregation and low yields of the native kinase (far left - no NV10). By adding NV10 to the cleavage buffer, aggregation was significantly reduced while the cleavage reaction remained unaffected.

Addition of NV10 to refolding buffer and throughout the refolding protocol helps suppress protein aggregation and may allow refolding at final protein concentrations greater than 0.25 mg/ml.

Use of NVoy polymers during affinity chromatography or ion exchange of the target protein assists in the release of endotoxin prior to protein elution.

Table: Comparison of Endotoxin removal methods. Target protein was bound to an affinity resin and processed according the NVoy procedure, the Detoxi Gel procedure (Pierce) and the method by Reichelt et al. using Triton X114 (Reichelt et al., Protein Expression and Purification, 46 (2006) pp.483-488). NVoy assisted endotoxin removal was the only method that resulted in a final endotoxin concentration below the detection limit. Moreover, the use of NVoy resulted in significantly higher protein recovery and protein activity.

Use of NV10 results in cleaner, active protein preparations compared to the use of detergents and enhances protein recovery, stability and storage. 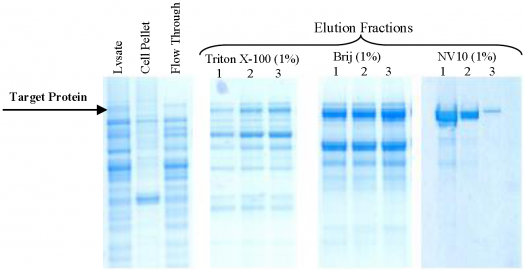 Because NVoy polymers improve protein solubility and prevents aggregation, it offers benefits for many downstream applications like protein crystallization.