Using antibodies or nucleic acid probes, researchers are employing fluorescent or chromogenic
development to visualize or quantitate their targets (protein, DNA/RNA, etc.).
Often, a target is not present in great abundance, or the primary antibody is of poor quality, resulting in faint signal and/or high background.  When this happens, it becomes necessary to amplify the signal so that it can be detected clearly, without high background.
Tyramide Signal Amplification [the abbreviation "TSA" is trademarked by PerkinElmer], or Catalyzed Reporter Deposition (CARD), is a simple method of easy signal amplification for greatly increasing sensitivity and resolution. 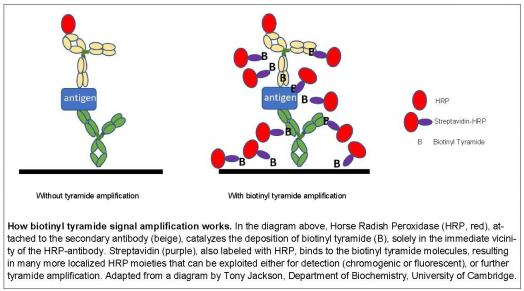